Sika Manu has committed his future to the Black & Whites by signing a one-year contract extension with Hull FC, keeping him at the club until the end of 2019.
The Black & Whites fought off competition from both Super League and NRL-based sides to retain the services of the Tongan international captain in 2019.
First joining the club at the start of the historic 2016 season, the 2008 Kiwi World Cup winner swept up the Hull FC Player of the Year award in 2017 and has gone on during his time in Super League to be recognised as the star forwards in the competition. 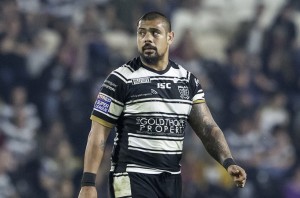 Manu has notched up close to 75 appearances for the club since joining from the Penrith Panthers and explained his excitement to be remaining at the club in 2019. Having won many major honours in his career, including the NRL Grand Final, Sika remains keen to reach Old Trafford with the Black & Whites.
Manu told the club’s official website: “Me and my family are really happy to have secured my future for 2019. “This club is in a great place at the moment and I believe we’re in a good position to continue our progression over the next few years and get to a Grand Final.
“This city has been great for us. We love it here in Hull – the people are really friendly, particularly the Hull FC supporters. It has definitely played a role in my decision.
“Lee is a brilliant coach. Some coaches beat around the bush a little bit, but he tells you how it is, and that’s really what you need as a player.
“He’s been great for the club, and for me personally too. His knowledge of the game is brilliant and he’s give me some really good guidance at times.”
Commenting on the new deal, head coach Lee Radford said: “I’m delighted to have Sika tied down for next season. You see Sika’s value when he’s on the field for us.
“He’ll be disappointed to have not been on the field as much this year due to injuries, but hopefully he’ll have a good run until the end of the season.
“He was a quality addition when he arrived back in 2016. He’s a no nonsense forward who is very aware of his own game and doesn’t need much interference from us as coaches.
“He sets his own standards and doesn’t need reminding when he doesn’t hit them because they’re very high. He has still got the aspirations to compete and be successful at the highest level, so to fend off serious competition for his services from the NRL is really pleasing.”