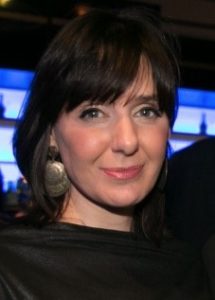 Presenter, arts professional and graduate of the University of Chester, Angela Samata, will share her experiences of mental health at a free public talk at the Warrington Campus on Thursday, February 27.

Angela presented the BBC1 BAFTA nominated, and winner of the Mind Media Award for Best Factual TV documentary, Life After Suicide. Describing her own experience and that of her children after her partner took his own life 15 years ago, the film encouraged the discussion and exploration of mental health issues, provided a challenge to the stigma of suicide, and was seen by a worldwide audience of over five million viewers. Angela has also worked with Channel 4, Channel 5 and advised on storylines for Hollyoaks.

Her talk, entitled ‘The lived experience and how to use it’, will take place in the North West Media Centre from 6.30pm.

Angela is an Ambassador of the Survivors of the Bereaved by Suicide, a nationwide charity offering a unique and distinct free service with online, face-to-face and telephone support to bereaved adults across the UK and an invited attendee of the All Party Parliamentary Group looking at Suicide Prevention in England and Wales.

Co-author of the NHS70 Parliamentary Award winning #SeeSaySignpost training, which has to date been accessed by 500,000 people globally, her charity work, together with the making of the documentary was recognised as Angela was named as the Merseyside Woman of the Year 2016 and awarded an Honorary Fellowship by Liverpool John Moores University.

As an Arts professional for over a decade, Angela led the John Moores Painting Prize at the Walker Art Gallery and continues to work freelance with individual artists and arts organisations, while also speaking publicly about mental health issues. Often her work in Mental Health and the Arts come together and in 2018 she completed a Winston Churchill Fellowship to the USA and Japan looking at both disciplines, visiting in patient units and arts studios in both countries.

All are invited to attend this free event although booking is essential as tickets are expected to be in high demand.