Catalans Dragons back rower Ben Garcia has signed a new three-year contract with the club.
The French International will remain at the Gilbert Brutus Stadium until the end of the 2021 campaign. 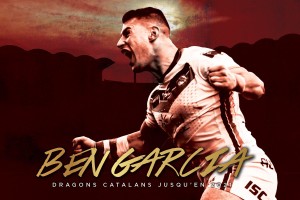 Garcia, who previously played for Brisbane Broncos’ NYC side, arrived at the club in 2013. He returned in Australia in 2016, having signed a two-year deal with Penrith, but came back to the Dragons few months later. Named Player of the Year last season, the utility forward, you can play back rower, loose forward, hooker or centre, is this season again a key player of Steve McNamara squad.
Garcia, 25 years old, has made 98 Super League appearances and scored 17 tries with the Dragons.
Garcia said: “I’m delighted to stay at the club. I received several options to pursue my career in another club but my wish was to stay here.
“I’m grateful to the club for the efforts they’ve made to keep me. I feel good in this club, in this team and I’m really looking forward to continue working with Steve.
“He built a great squad, who enjoy working together, and he and the club have great ambitions for the future and I’m really happy to be a part of it.”