The former Wigan man returns to Super League for 2019
Widnes Vikings have signed the Grand Final and World Club Challenge winning centre, Anthony Gelling, on a two-year deal.
Gelling will link up with the Vikings for the start of the 2019 season, moving from the NRL side, New Zealand Warriors. 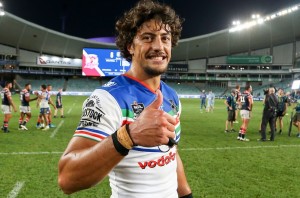 The charismatic centre is renowned on these shores for his six-season spell with Wigan Warriors between 2012 and 2017, where he scored 52 tries in 115 games.
Gelling has appeared in two Grand Finals, a Challenge Cup Final and a World Club Challenge victory.
Francis Cummins, Interim Head Coach of Widnes Vikings, said: “Anthony is a tremendous signing for the club. We’ve been working really hard to find a calibre of player who will enhance our team, and I believe that Anthony is that type of player.
“Anthony has been one of our top targets, as we have planned for next season, and James Rule has been in regular conversation with him over the past couple of months to help make this deal happen.”
Gelling added: “I’m delighted to be joining Widnes Vikings. Looking at the talent at the club, their players who have re-signed, and the young lads who are coming through, I believe that the Vikings have real potential for the seasons ahead.
“Before signing this deal, I spoke in length to James Rule. He shared the club’s vision for the coming seasons and I’m very excited to have the opportunity to be part of this.
“Widnes Vikings have had a tough season this year, but I know that we can turn this around. I am looking forward to linking up with the boys next year in 2019 and to making a difference to the side.”