Hughes Played on with Ruptured Testicle 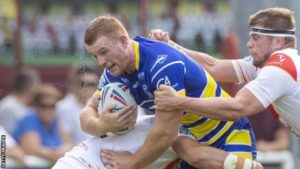 Utility man Hughes was injured in the first half in Perpignan but stayed on to see out the full game. “To play 50 minutes with a ruptured testicle shows the courage he’s got and his pain threshold,” said Price. “He put the team first to stay out there and try and win the game.”

After being treated in hospital in Perpignan, Hughes was released to fly back to the United Kingdom on Monday.

“He got rushed to hospital and was operated on that night,” added Price. “He’s now home safely and doing well. He’s still got to see a specialist back here in the UK.

“Jack was unbelievable. Knowing him, he’s one tough guy and will do all he can to get back.”

Hughes is now a doubt for the Challenge Cup final against St Helens on 24 August.