Sika Manu will retire from professional rugby league at the end of the 2019 Betfred Super League season. 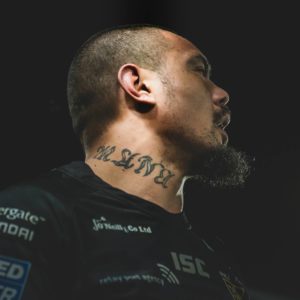 The 32-year-old is one of the most successful players to have worn the Black & White jersey, having won the World Cup, the World Club Challenge, the NRL Premiership and the Challenge Cup during a glittering career.

His fourth season with Hull FC will be his last in professional rugby league, having made over 250 career appearances, including over 100 for the Airlie Birds.

The well-decorated forward will play out the remainder of the 2019 campaign with the Black & Whites, hoping to earn one final piece of silverware to finish off an outstanding rugby league CV.

Born in Lower Hutt, New Zealand, Manu played junior rugby league with Randwick Kingfishers, Upper Hutt Tigers and Pentone Panthers, before he was a part of the 2004 Junior Kiwis side that defeated England Under 18s.

Twelve years ago, a 20-year-old Manu fulfilled a childhood dream when he made his NRL debut with Melbourne Storm, who he would later go on to win the 2012 Grand Final with.

It proved to be third time lucky at ANZ Stadium for the second-rower, who took part in Melbourne’s 2008 Grand Final defeat against Manly Sea Eagles before missing out on their 2009 Grand Final triumph through injury.

The Provan-Summers Trophy wasn’t the first piece of silverware in Manu’s trophy cabinet, however, as he had previously won the 2008 Rugby League World Cup with New Zealand.

It certainly wouldn’t be the last piece of silverware he added to his collection. Manu went on to lift the Challenge Cup trophy in his debut season with Hull FC in 2016, before helping the Black & Whites defend their cup title the following year.

The former Tongan international captain is regarded as one of the most intimidating players to wear the famous Black & White colours.

Speaking on his decision to call time on an illustrious career, Manu said: “It was an extremely hard decision to make because I have had an enjoyable career, especially my time here at Hull, but I feel that the time is right to hang up the boots.

“When you give your all on the field every week, giving 110%, it certainly takes its toll on your body and I have been feeling the effects of it on the training field this season.

“I have to say that coming to play for Hull FC has been a great decision because it’s a huge club with a lot of culture and a lot of history, so it’s nice that I am able to end my career here.

“It’s been an amazing journey with plenty of highs and lows along the way. I feel very lucky that I am able to finish up here at Hull FC.

“Hopefully I will be able to give the supporters one last treat before I retire. We’re still in with a chance of making the play-offs and potentially going on towards the Grand Final, so that is the aim for the rest of the season and I will give my absolute all to help the team get there.

“I’m not worried about myself. I’m more concerned about rewarding the club and the fans who have looked after me so well in the four years that I have been here.”

Manu has been one of Hull FC’s prized possessions in recent years, using his experience and skill to help steer the club in the right direction.

The 32-year-old was crowned as the club’s Player of the Year in 2017, standing high in the regards of head coach Lee Radford.

Commenting on Manu’s decision to call time on his playing career, Lee Radford said: “I think he is one of the best signings the club has made in the modern era and it will be sad to see him leave.

“He has enjoyed some great success with the club since joining in 2016. Obviously he had the two Challenge Cup wins, but he also got us to within touching distance of two Grand Finals and that’s something I’m sure he’ll be looking to improve on before he signs off.

“What I like so much about Sika is how he goes about his business. He’s a real student of the game – you would be if you’ve played under some of the coaches that he’s played under. He’s very easy to coach because he takes everything in.

“He’s one of those sort of players who plays the game on the edge and that’s another thing I really admire about Sika.