Huddersfield Giants have made Kiwi and Samoan International Prop Forward Suaia Matagi their first addition to the 2019 squad.
The thirty-year old international has played over 100 NRL games and will leave Paramatta Eels at the end of this campaign.
Suaia Matagi said: “I am extremely excited to take my football to the next level under the leadership of Coach Simon Woolford and I’m also looking forward to the challenge of playing in the English Super League. 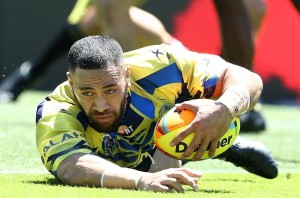 “Joining a proud Club like the Huddersfield Giants is a privileged and I will represent our fans to the best of my ability.”
Head Coach Simon Woolford: “I was looking for some real grunt and aggression in the front row and Suaia will bring that and a whole heap more.
“The fans will love his action packed style and he is a man that won’t take a backward step and he relishes the tough stuff up front.
“We have a number of relatively younger front rowers in Dickinson, Smith and English who will benefit enormously from having a man like Suaia around them at training and on the pitch and his presence will bring confidence and leadership to the forward group.”