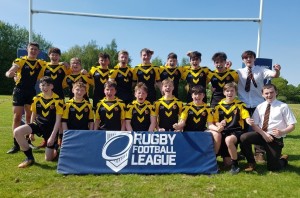 Squad: Joe Smith, Sam Wilkinson, Tom Lee, Callum Taylor, Liam Chadwick, Max Mosley, Louis Clarke, Tom Campbell, Elis Povey, Jos Appleton, Matthew Makin, James Appleton, Ryan Wood, Nathan Ellis, Ciaran Barnsley, Alex McCarthy, Joe Baldwin.
This team are the reigning Year 8 champions having won a tough derby battle against Wigan rivals St John Fisher 26-16 in last year’s Champion Schools Finals.
And the route to this year’s final has not been easy.
In round one of the Nationals, they had a tough encounter with Carleton before winning through 20-14.
“They scored first and we were playing catch-up from then,” said coach Tim Heyes.
“We had a decent spell in the first half then in the second half it was pretty much equal, we both scored tries, it was close. The quarters and semis were both built on very sound defence.”
And defence seems to be the key to their success according to Tim: “We’ve not done a great deal on defence because they just defend to a man.
“They’ll all get stuck in and you can’t ask for anymore than that at this level. Their defence is probably the best I’ve seen since I’ve been teaching, they’re just naturally very good at it.”
But they can score tries, particularly through prop Tom Campbell. “He’s the top tryscorer, and is a real talent,” said Tim.
“And Callum Taylor in the centre has been our second top tryscorer for the last three years.”
The side are led by Ryan Wood, while full back Joe Smith, who comes from a football background, is the first name on the team sheet.
Loose forward Tom Lee was outstanding in last year’s final, winning the Player of the Match award.
“He won it for us, he was outstanding,” said Tim.
“He did the short kick off, caught it and did the long passes. You’re always going to get 100 per cent from him.”
State of Mind have had the honour to deliver session in the school this year and will be setting off the Marathon run again later this week
Tim is quick to acknowledge the support of the parents.
“It’s been fantastic. They turn up for matches at different times of the day and different times of the year they somehow manage to get there and support us. It’s strong support.”
Road to the Final
Round 1
St Peter’s 20-14 Carleton
Quarter Final
St Peter’s 36-6 Dowdales
Semi Final
Archbishop Sentamu 10-40 St Peter’s