State of Mind Sport is proud to announce it will be the official charity partner of The North West Counties Football League (NWCFL) for the 2019/20 season. 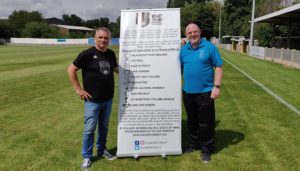 The charity was established in 2011 following the tragic death of Terry Newton, former Wigan Warriors and Great Britain international rugby league player who took his own life in September 2010. State of Mind Sport’s founders were determined to prevent similar tragedies in other communities, by raising awareness of mental health concerns, tackling stigma, providing mental fitness education and resilience, and by signposting individuals and families to timely support during tough times.

State of Mind Sport began by providing mental fitness sessions to Super League clubs, players, coaches and officials and subsequently in schools, colleges, universities, prisons and increasingly in the workplace, including emergency blue light services and the construction industry.

Over 60,000 individuals have now received the acclaimed State of Mind mental fitness sessions and this partnership will be the first with a football league, and will provide access to over 3,500 registered players, officials and supporters.

NWCFL Chairman Paul Lawler said: “Suicide is the most common cause of death for men aged 20-49 in England & Wales so we are delighted to be working with State of Mind Sport to educate and raise awareness of mental health issues.

“Sadly there have been a number of suicides of players within our League, and with thousands of players, officials and supporters being involved with the League, there is no doubt that mental health issues will impact a large number of people involved in the competition. By raising awareness, we hope to be able to encourage people to talk more openly about mental health issues.”

Co-Founder and Trustee of State of Mind Sport, Dr Phil Cooper MBE said: “We are really looking forward to our partnership with The North West Counties Football League over the coming months, as it will enable us to reach out and engage with 60 North West Counties Football League clubs and offer them our multi-award-winning education and awareness sessions on mental fitness and resilience.”

If you are interested in inviting State of Mind Sport to speak at your club, please contact elaine.prendergast@www.stateofmindsport.org