International Men’s Day will fall on the same date it does every year – the 19th of November.

One of the main reasons for International Men’s Day is to raise awareness for male suicide. The event has been running for a number of years and many charities run awareness campaigns around it. 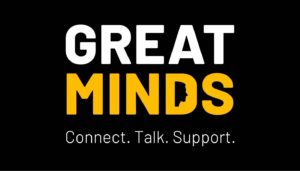 Great Minds is a new collaborative project launching on 21 September that is part of the West Yorkshire and Harrogate Health and Care Partnership’s broader suicide prevention work. It is being carried out in partnership with State of Mind Sport.

For more information about Great Minds email swy-tr.greatminds@nhs.net and watch our video. vimeo.com/449412758

What issues does International Men’s Day seek to address?

– The high male suicide rate across the world
– The educational challenges that face both men and boys at all stages of life
– Men’s health, their shorter life expectancy and the fact that they suffer from workplace deaths at a much higher rate than women
– Male violence, and the fact that males are also victims to things such as rape, sexual exploitation and domestic violence
– The challenges faced by men as parents, especially as single parents or parents that do not have a good relationship with the Mother of their children. There is also focus on Fathers rights
– Male survivors of violence or abuse, including domestic abuse
– The negative portrayal of men in the media and beyond. This includes male stereotypes that are used by well-known brands in advertising campaigns