The charity has played a key role in developing the Mental Fitness Charter that forms a key element of the tournament’s plans and which was announced last earlier this year by the Duke of Sussex, Prince Harry.

RLWC2021 will be the first-ever global sporting event to launch such a Charter, which aims to eqiup every player, team official, match official, team-mate and volunteer with the tools and techniques they need to look after their own mental fitness, and of those around them.

As part of this exciting project, RL Cares will deliver mental fitness workshops to 8,000 young Rugby League players and their parents, supported by Movember and the Rugby Football League.

Movember is the leading global charity changing the face of men’s health, with a focus on mental fitness and suicide prevention. RL Cares and Movember have been working together for the last two years on the successful ManVan and Tackle the Tough Stuff campaigns.

RL Cares Head of Grants Programmes Emma Goldsmith said: “We are thrilled to have the opportunity to build on our successful track record in delivering mental health messages to people within the sport.

“The Mental Fitness Charter is a unique and very forward-thinking element of RLWC2021 and we are looking forward to working with Movember and the RFL to help the tournament make a massive, positive difference to the lives of people in Rugby League communities, both in the UK and around the world.” 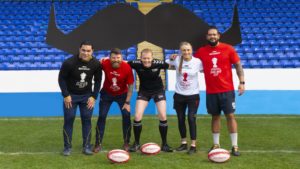 As the Official Mental Fitness Partner of RLWC2021, Movember will deliver its ‘Ahead of the Game’ initiative, a programme which is focused on improving youth mental fitness through community sport.

Working with community Rugby League clubs across the country, ‘Ahead of the Game’ will be presented to 8,000 young athletes, 8,000 parents and 360 coaches, with the aim of improving mental resilience in adolescent athletes and raising mental fitness literacy and awareness among players, parents and coaches.

The evidence-based programme, which has been developed by sports psychology researchers in Australia, is also being rolled-out in other sports in Canada, New Zealand and Australia.

Movember will also play a crucial role in the tournament-time mental fitness campaign, with matchday activations – in the form of game day activity, community outreach and digital content – planned to raise mental fitness literacy amongst supporters.

As part of its £800,000 investment into the initiative, Movember will also help to create a post-tournament legacy plan to ensure the impact of the Mental Fitness Charter is felt long after the final whistle at the final game.

“By delivering this programme alongside Movember, Rugby League Cares and the Rugby Football League, we will further demonstrate how the legacy of RLWC2021 is being created before the tournament begins in twenty months’ time. This initiative will make a genuine positive impact in communities across England, along with promoting positive mental fitness through Rugby League that reaches millions of people worldwide.”

Tracy Herd, Programme Manager for Movember said: “We are delighted to be working with RLW2021 and Rugby League Cares to deliver sport-based mental fitness training to communities where the impact of poor mental health, particularly for men, can be devastating.

“Research shows that half of mental health conditions start by the age of 14, and 75 per cent by the age of 24. By intervening early and teaching boys the skills to be able to cope with life’s setbacks and build their resilience, it will prevent minor issues from becoming bigger problems later in life.”