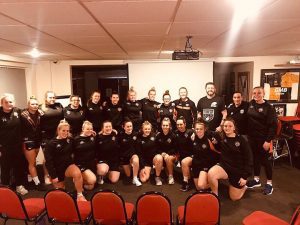 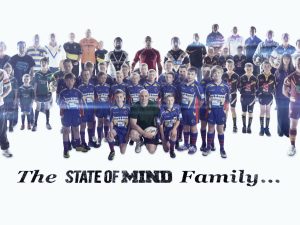 State of Mind Sport (SOMS) was established in 2011 after the death of international rugby league player Terry Newton, who tragically took his own life. SOMS was set up by four experienced NHS staff who all had a passion for rugby league and were keen to prevent similar incidents but were uncertain about how best to make an impact. They were joined by former team mates of Terry (Brian Carney and Terry O’Connor). Crucially, they brought the perspective of the player and important contacts in the sport and the media and gave SOMS some valuable credibility to build numerous partnerships to achieve our goals of trying to improve the mental fitness of rugby players, coaches, fans and communities and that’s why we are in Keighley this weekend.

Our work
We continue to deliver mental fitness sessions across the country and have delivered to over 60,000 people across the country in rugby league clubs, sports clubs, schools, colleges, universities and businesses as well as police, fire and ambulance services.

Offload
A partnership with Rugby League Cares, the RFL, and three rugby league club foundations (Salford Red Devils, Warrington Wolves and Widnes Vikings) has led to an innovative ‘Offload’ project. The project is Big Lottery funded for the past two years and now for a further two years for a mental fitness and resilience programme, targeted at groups of men at risk of developing mental health issue and delivered by former rugby league players and officials with community club foundation staff at the stadiums.

Squad Goals
State of Mind Sport in partnership with Altru Drama have premiered a drama performance based on rugby league and funded by the Isabella Blow Foundation saw performances
taking place in schools in Wigan, Warrington and St. Helens for its very first run with other funding being sought to deliver in different areas.